TRUMP DONALD
GIVE your 2¢
WHen Trump Tweets,
Give his opponent 2¢ or more!
Let's trump Donald Trump!
Give your 2¢
Share
Make Donald pay for his tweets. Literally.
When Donald gives us his "two cents",
give his opponent your 2¢.

Go to FAQ
Connect your Twitter account to troll Trump!
We'll reply to his tweets on your behalf to let him know how much money he just gave his opponent. It's hilarious, and you don't have to do anything!
For example, if you donate $20 at $0.02 per tweet, we'll troll Trump for his next 1,000 tweets. See the image for what this looks like.
This product is out of stock.
Product is not available in this quantity.
Thank you! Your submission has been received!
Oops! Something went wrong while submitting the form. 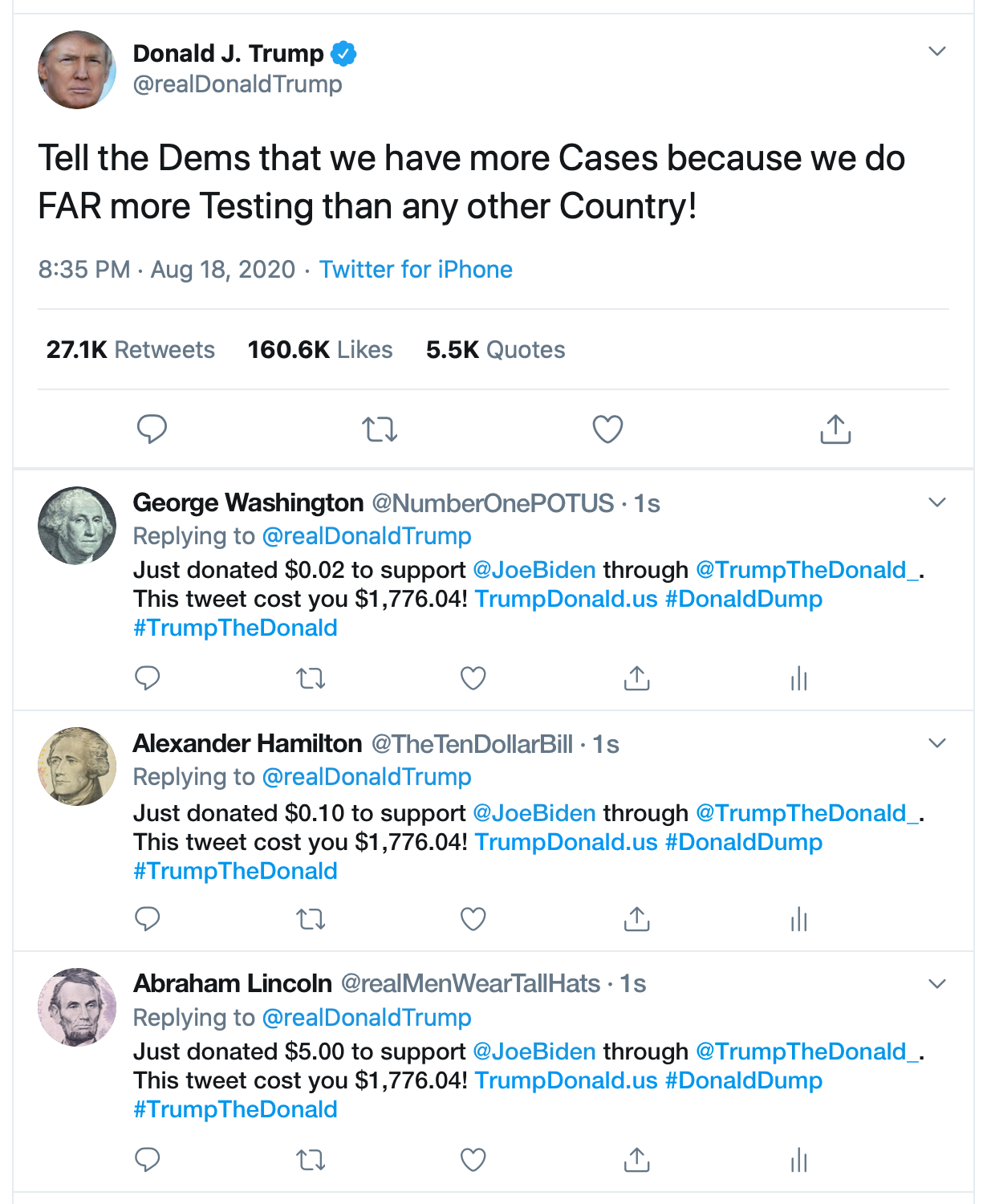 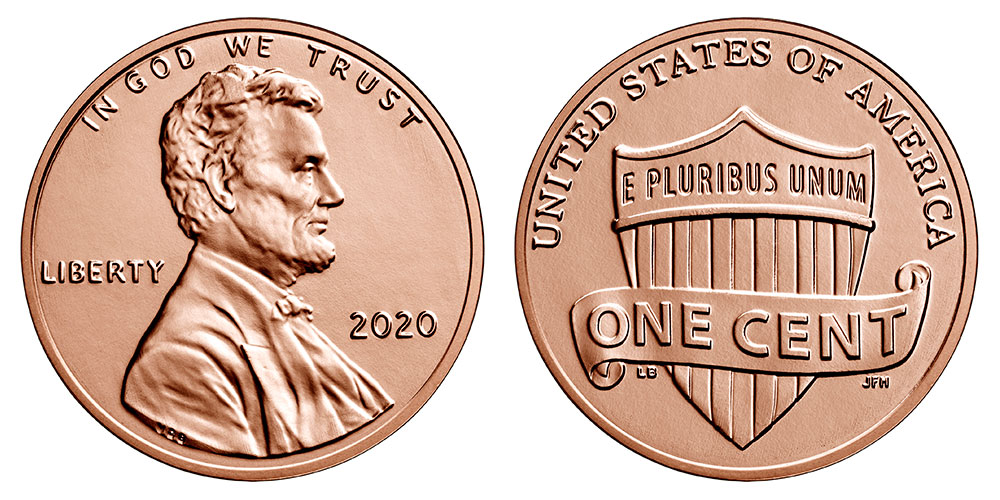 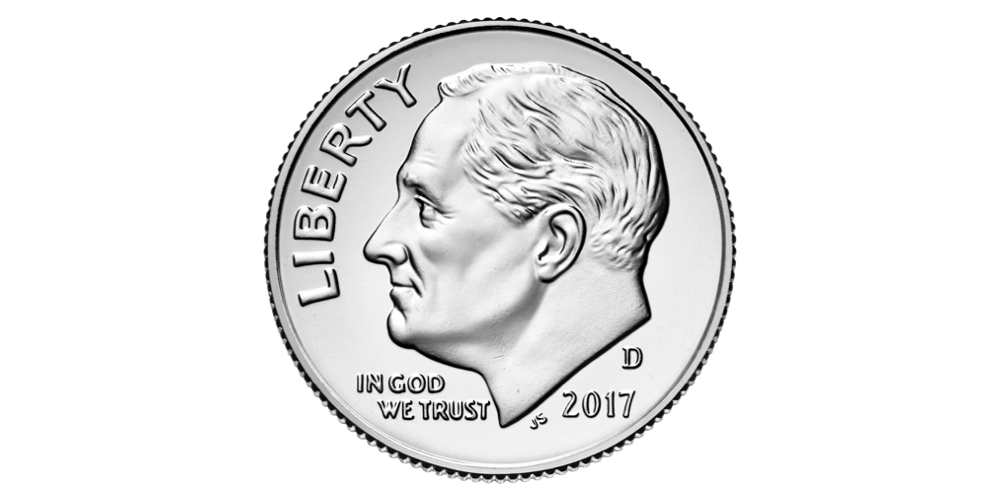 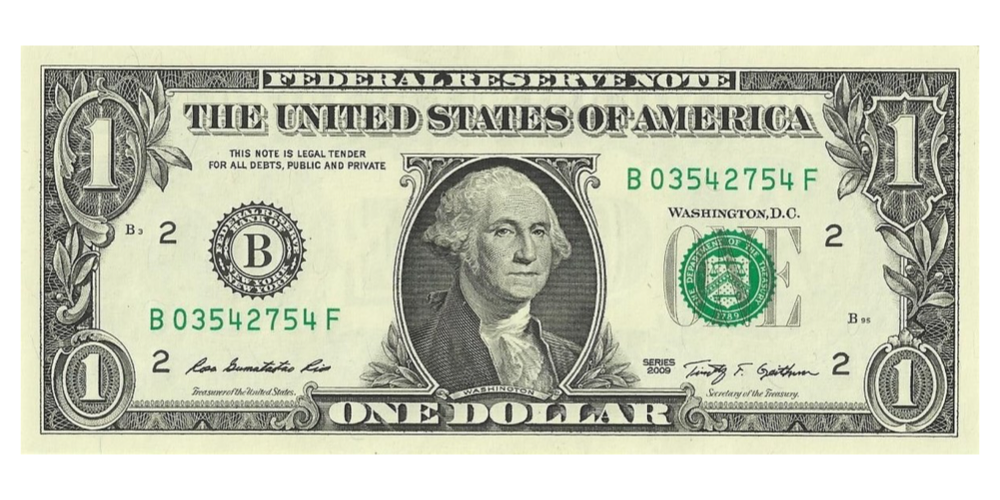 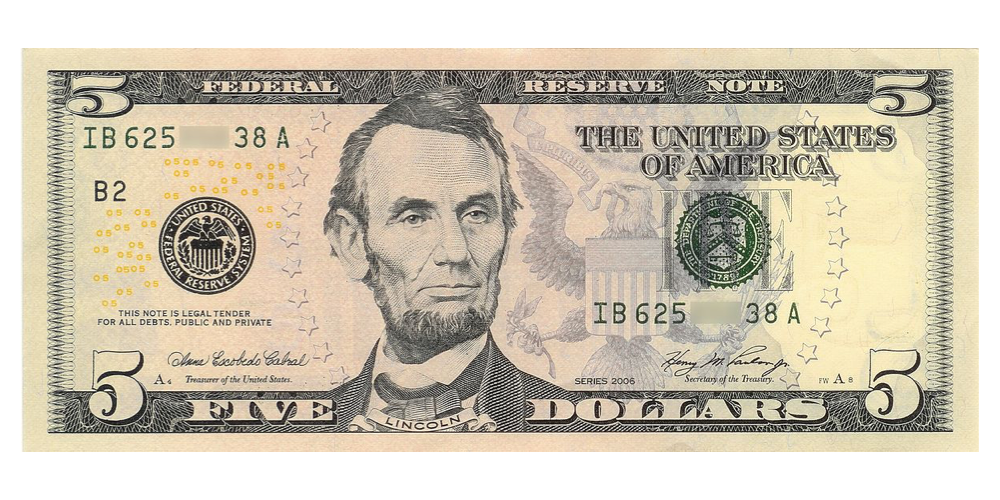 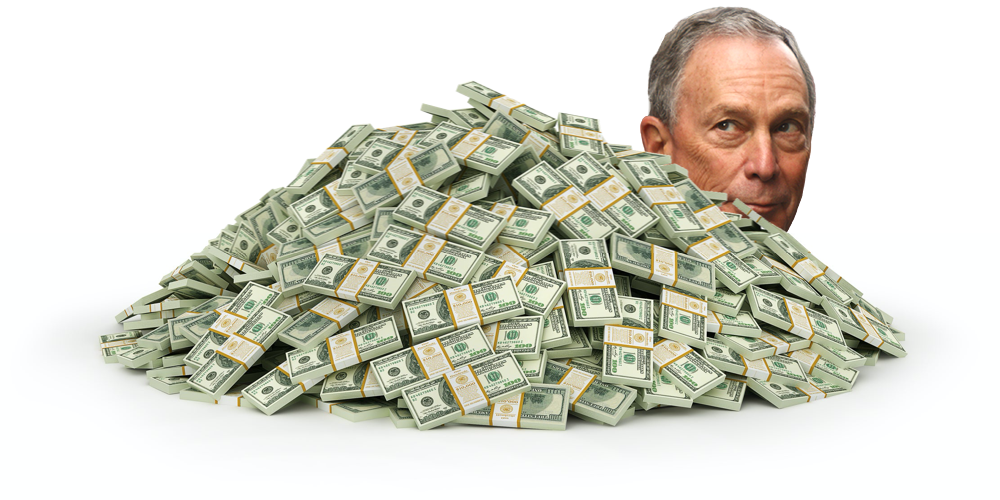 $1,000
per tweet
"I AM MIKE BLOOMBERG"
SELECT
How does it work?
You make a one-time donation here, choosing an amount per tweet and number of tweets. When Trump tweets, we tell him how much his tweet just cost him. You can also (optionally) connect your Twitter account, and then we'll reply to his tweet on your behalf! See what this looks like below. 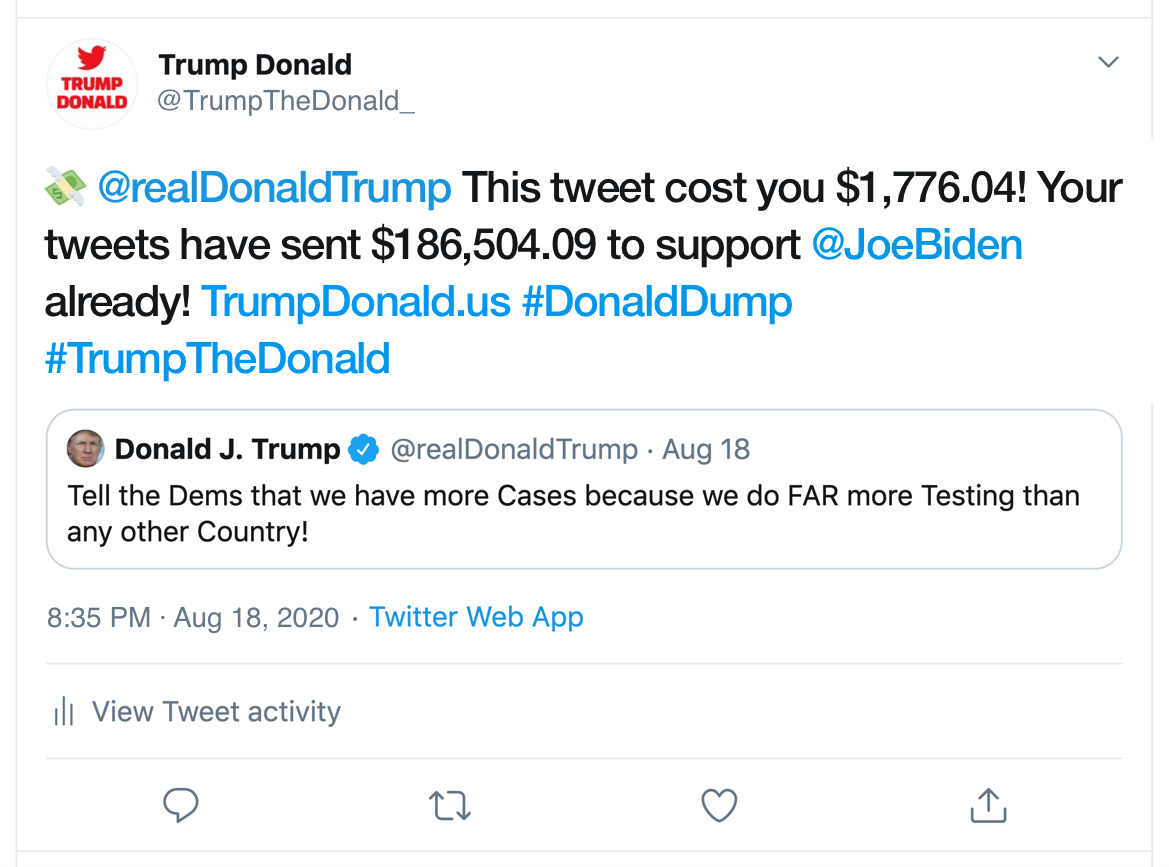 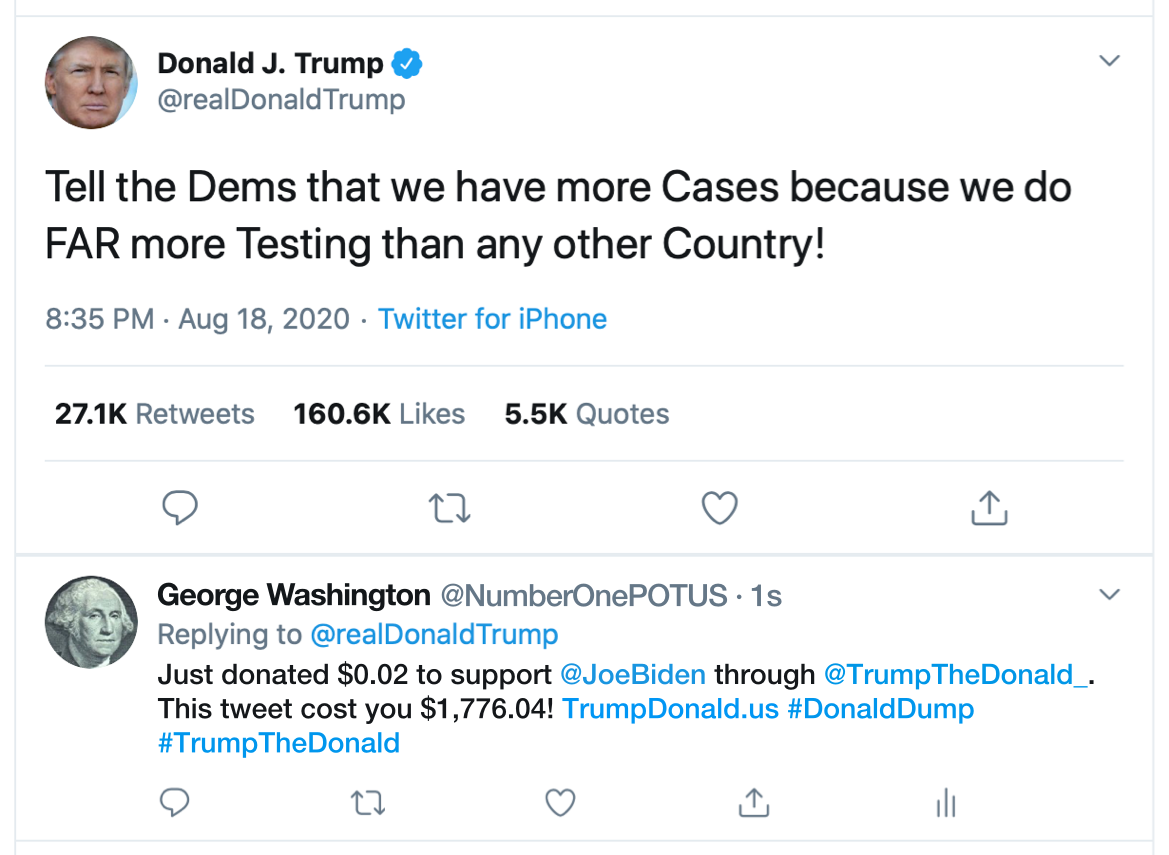 We reply to Trump on your behalf
For example, suppose George Washington donates $20, choosing $0.02 per tweet and 1,000 tweets. For each of Trump's next 1,000 tweets, we add $0.02 to the total and tell him how much his tweet sent to Joe Biden. If George connects his Twitter account, we reply to each of Trump's tweets on his behalf.
How do i participate?
Make a donation — that's it! You can also connect your Twitter account to troll Trump.
Where do the donations go?
We send 100% of the donations we receive to Priorities USA, one of the largest groups working to defeat Trump. You can choose to give 15% of your donation to us as a tip, but this is totally optional! If you do give a tip, we'll use the funds to help cover our adminstrative costs (like legal and cloud hosting fees) and run marketing campaigns so Trump Donald can reach more people.
Are donations Refundable?
In general, no. Donations can't be refunded once they're made. We'll do our best to give you a refund if you donated by mistake or chose the wrong amount, but we'll evaluate requests on a case by case basis. See our Terms of Service for more detailed information.
Do you charge any fees?
No, we charge zero fees! Our payment processor Stripe charges a fee of 2.9% plus 30¢ (a standard credit card fee). We donate 100% of the funds we receive, though we give you the option to designate 15% as a tip for us, which we'll use to grow Trump Donald.
Is this a subscription?
No, it's not a subscription. You make a one-time donation. (But you can make a donation multiple times if you like.)
Do retweets count?
Yes. A lot of the damage Trump does on Twitter is through retweets, so we count them.
Is my donation tax deductible?
No, your donation is not tax deductible for federal income tax purposes, like other political contributions.
Who can donate?
Only U.S. citizens and permanent residents (Green Card holders) can donate, not foreign nationals. This is in accordance with federal law.
Is my Donation secure?
Yes. We use Stripe to process payments, just as millions of other organizations do. Stripe is PCI compliant to the highest level in the payments industry, uses only secure HTTPS connections, encrypts credit card numbers at rest with AES-256, and undergoes regular audits of its systems.
What happens after the election?
We hope to keep Trump Donald running as long as Trump is on Twitter! We send your donations to Priorities USA (see the other FAQ above). We suspect that after the election they'll use the funds to support other Democratic candidates.
Any questions? Email us at contact@TrumpDonald.us.
Privacy Policy  |  Terms of Service 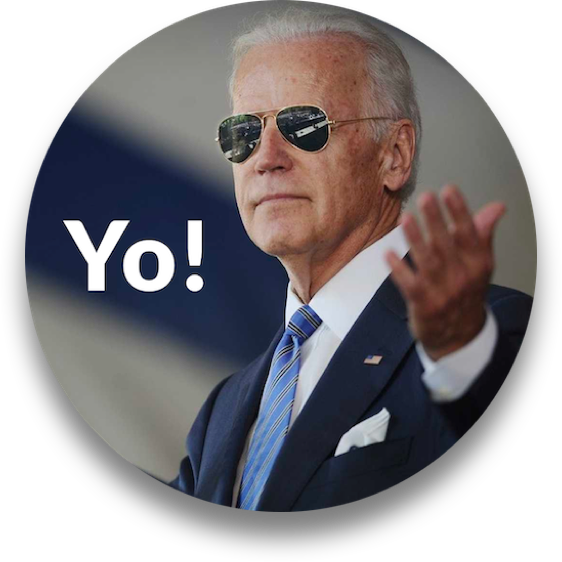 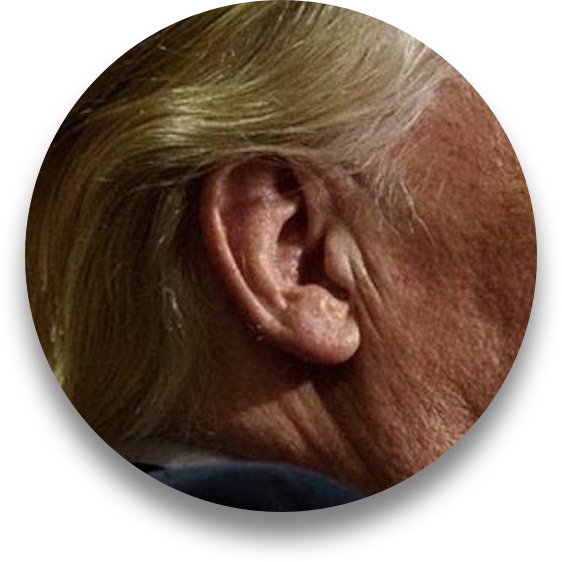